Quick, a place for the parties! 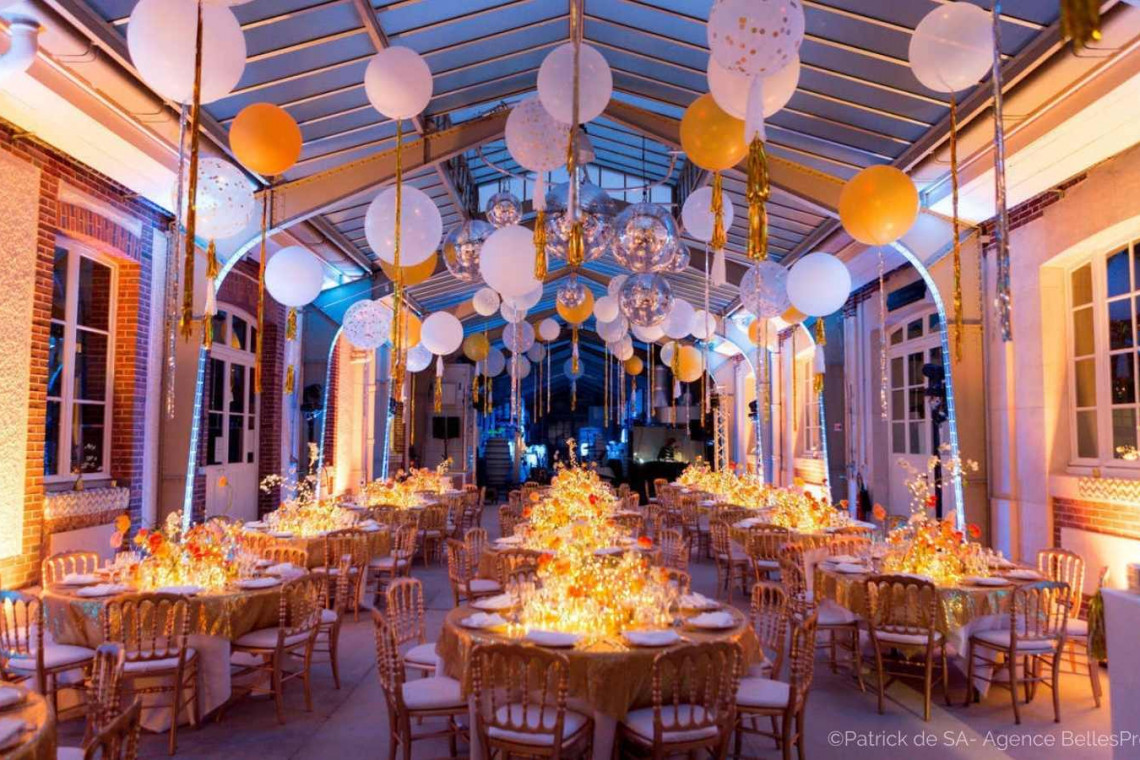 It's the last straight line for the organization of end-of-year events or of a new year's eve ceremony and you are out of ideas? We have made a small thematic selection of venues where it is good to be in small committee, for a prestigious evening or for a wild party. There is something for every taste and every need!

Giacometti Institute
In the heart of Montparnasse, the district where the sculptor lived and worked throughout his career, Alberto Giacometti's studio has been meticulously reconstructed in the superb Private Mansion of the Art Deco master, Paul Follot. On the first floor, reception rooms have been set up in the decorator's apartment and are an ideal place to organize intimate and elegant dinners.

Villa L' Ange Volant
A few minutes from the heart of Paris, the Villa L'Ange Volant, designed in 1927 by Gio Ponti for his friend Tony Bouilhet, heir to the Christofle company, is the only French creation of the famous Italian architect. This elegant country house offers a real immersion in the universe and work of the architect-designer and welcomes receptions and events up to 60 people in a refined, cheerful and warm atmosphere.

Nissim de Camondo Museum
A splendid residence rigorously maintained in its original layout on the edge of the Parc Monceau, the Nissim de Camondo Museum is the life's work of a passionate collector. In addition to being one of the most beautiful museums in Paris, it is also the ideal place for elegant and intimate receptions where the perfume of the Belle Epoque blends with the refinement of the Age of Enlightenment with great charm and poetry. 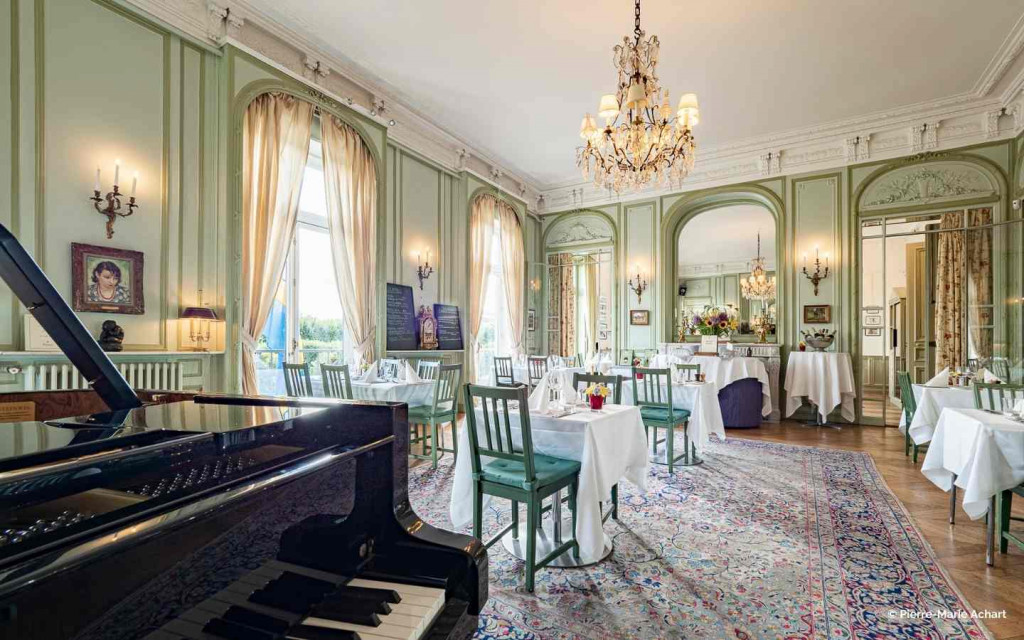 Founded in 1891, the "Svenska Klubben i Paris" is the oldest Swedish Club abroad. Ideally located, the Cercle Suédois offers a warm and classic decor, which combines the softness of Gustavia with the muffled atmosphere of the artistic salons of the 19th century, and an exceptional view of the Jardin des Tuileries.

In the shadow of the great names of literature

The House of Victor Hugo
What if you invited yourself to the home of one of the greatest geniuses of French literature? Victor Hugo lived for 16 years (1832-1848) in this apartment on the Place des Vosges. Both intimate and theatrical, gothic and warm, a touch exotic and deeply romantic, this place exudes an atmosphere like no other and will leave your guests under the spell of a timeless moment.

Dosne-Thiers Foundation
Located in the heart of New Athens, this beautiful Private Mansion was for a long time the home of the founding father of the Third Republic, renowned historian and enlightened art lover, Adolphe Thiers. Today, the Foundation houses the Thiers Library with more than 150,000 volumes and documents dedicated to the history of France in the 19th century and welcomes your prestigious events in a set of vast and luminous salons with a refined decoration. 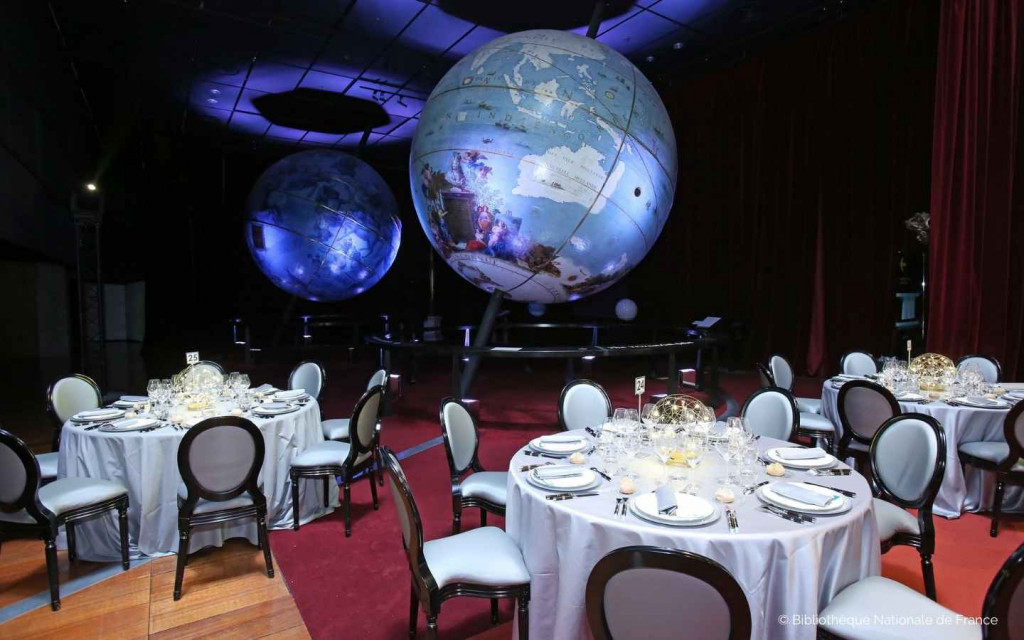 The Bibliothèque Nationale de France is one of the oldest French cultural institutions (700 years of history) and can welcome you in Paris in four venues : the François-Mitterand site (13th), the Richelieu site (2nd), the Arsenal library (4th) and the library-museum of the Opera (9th), a multitude of spaces for your events from the most functional to the most grandiose.

In Nantes, the Louis XVI Circle
Located in a magnificent Private Mansion in the center of the ancient capital of the Dukes of Brittany, the Cercle Louis XVI, formerly the Reading Room of the City of Nantes, has existed since 1760, making it the oldest Cercle in France. A place of exchange, conviviality and culture, the Cercle Louis XVI elegantly perpetuates the fine tradition of literary and artistic circles and opens its salons to the organization of events and receptions

Architectural prowess for a breathtaking view

Paris-Longchamp racetrack
Nestled in the middle of the Bois de Boulogne, this Parisian temple of the gallop since the middle of the 19th century and completely rehabilitated by Dominique Perrault (the architect of the François Mitterrand Library), offers a whole range of refined spaces, suites, lounges, terraces with an unobstructed view of the racecourse and Paris. 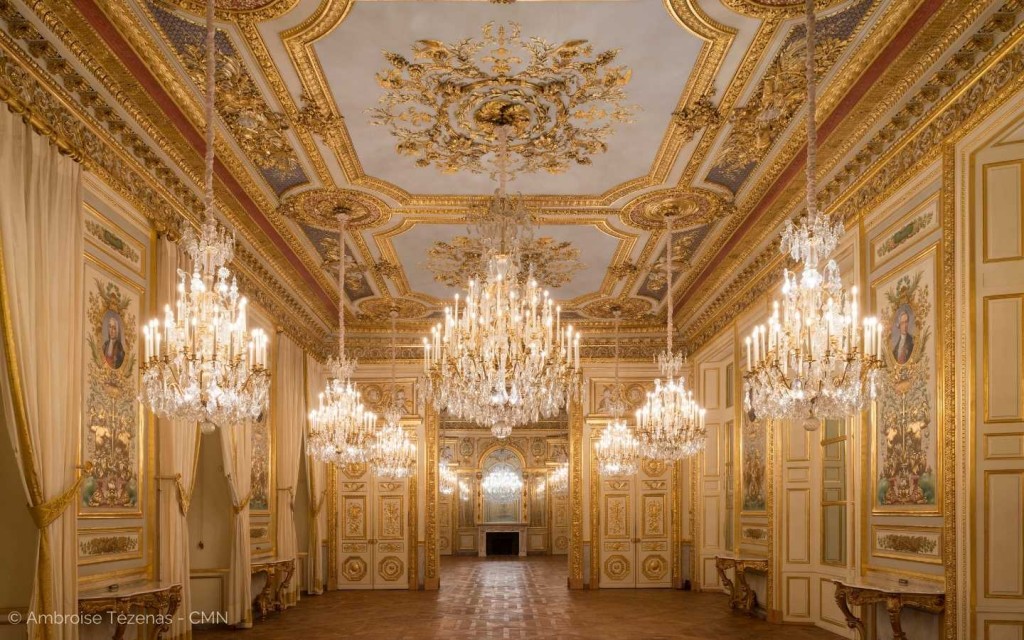 This architectural jewel, completed in 1775, housed the Garde-Meuble de la Couronne until 1789 before becoming the headquarters of the Ministry of the Navy. After an impressive 4-year restoration campaign, it now offers us a plunge into the heart of the 18th century and its lavish lifestyle. Its sumptuous reception areas provide the setting for extraordinary events and open onto the most beautiful view of Paris.

The Museum of Confluences in Lyon
Since 2014, the Musée des Confluences has stood at the confluence of the Rhône and the Saône, but also at the "confluence of knowledge". Innovative cultural site, the museum is installed in the heart of a monumental structure with a unique architecture where glass, concrete and stainless steel are mixed and offers for your events its numerous Spaces available to hire with a breathtaking view of the city and the confluence of the two rivers in the background.

Paris and its jobs

La Monnaie de Paris
The Monnaie de Paris, the first and last active factory in the heart of the capital, has been dedicated to minting money for more than 11 centuries. Built in 1775, this majestic neoclassical palace, the historic site of the oldest French institution, is an exceptional setting for intimate, grandiose or unusual events. 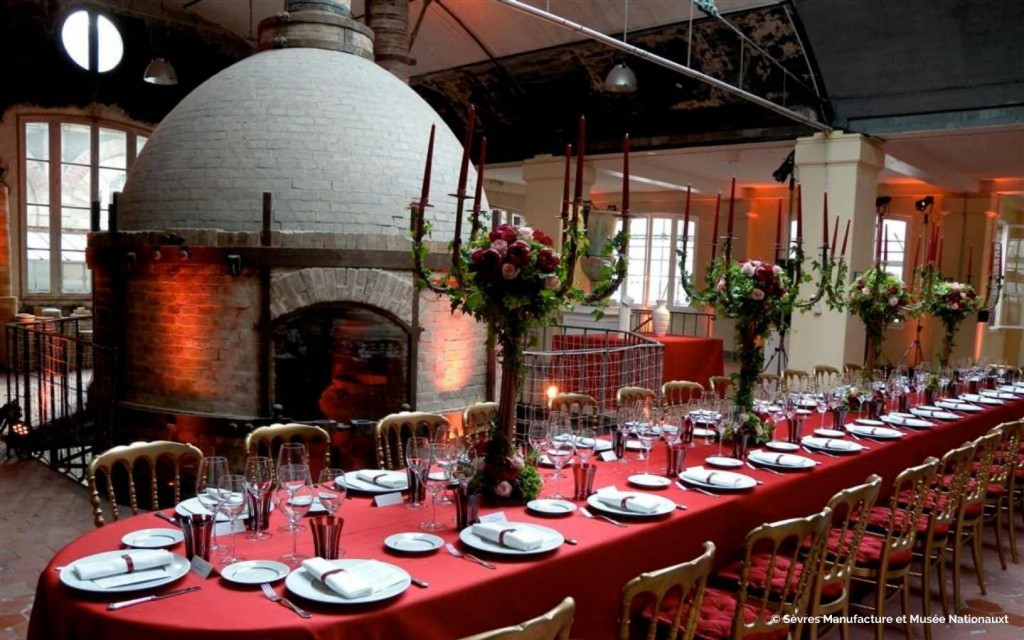 Located on four hectares, at the gates of Paris, Sèvres Manufacture and National Museum is a unique place of dialogue between heritage and creation, which brings together the Sèvres Porcelain Manufacture in activity since the 18th century and the National Museum of Ceramics created in the following century. To dine in the middle of the kilns that make the legend of this prestigious institution is an experience that is not to be forgotten!

Carnavalet Museum
Housed in one of the most beautiful private mansions in Paris, the Carnavalet Museum tells the story of Paris from prehistoric times to the present day through an immense collection of works evoking the key events in the history of Paris and its most emblematic personalities. Bright and elegant, the famous Salle des Enseignes beautifully echoes the trades of Paris and is an undeniably charming space for your events.

European House of Photography
Created in 1996, the MEP is a cultural institution dedicated to the photography of the second half of the 20th century and the 21st century. Each year, it offers numerous exhibitions of internationally renowned photographers as well as emerging artists and offers the possibility to organize your events in the exhibition galleries.

Jacquemart André Museum
Created by the Jacquemart-André couple at the end of the 19th century, the museum houses one of the most beautiful private collections of works of art in the capital in this sumptuous building on the Plaine Monceau. The three reception rooms of the Jacquemart-André museum allow you to receive your guests surrounded by the masterpieces of Fragonard, Rembrandt or Tiepolo. 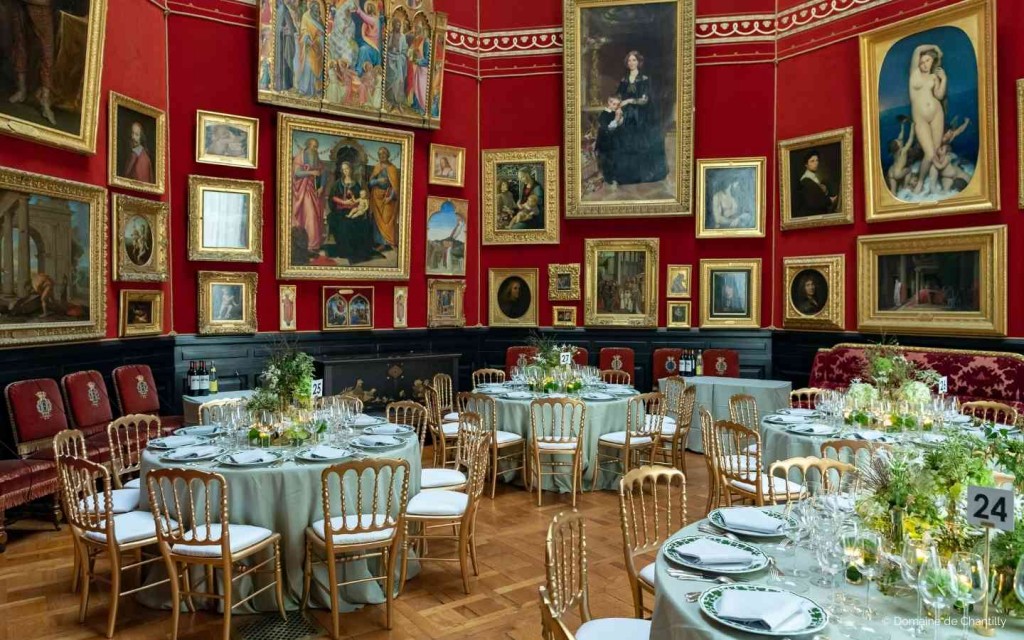 A jewel of French heritage and former residence of the Princes of Condé, the Château of Chantilly is the work of the Duc d'Aumale, who made it the setting for his priceless collections of works of art and ancient manuscripts by creating the Condé Museum. There are many spaces here (Battle Gallery, Painting Gallery, Sanctuario...) allowing you to dine in the middle of the treasures of the Duke of Aumale for an unforgettable evening.

Museum of Modern Art of Paris
The Museum of Modern Art is housed in an Art Deco palace typical of the architecture of the 1930s and has a collection of more than 15,000 works that embrace the main currents of art from the twentieth century to today.
It welcomes your receptions and events in its monumental rooms lined with huge bay windows and literally immerses your guests in the most emblematic works of Modern Art for a rare immersive experience.

Looking for a large space?

Potocki Hotel
The Hôtel Potocki, headquarters of the Paris Ile de France Chamber of Commerce and Industry, is one of the most prestigious reception halls in Paris venues . The sumptuous original decor (1880's) was completed by vast Art Deco style rooms in the 1920's and can accommodate more than 200 people for dinner and up to 400 in cocktail format.

Petit Palais, Museum of Ende Arts of the City of Paris
Built for the 1900 World's Fair, the Petit Palais, near the Champs-Élysées and the Seine, offers a panorama of artistic creation from Antiquity to the beginning of the 20th century and offers its sumptuous Belle Epoque setting for private events. The extraordinary South Gallery can accommodate up to 300 people for a prestigious dinner and 600 for a cocktail party. 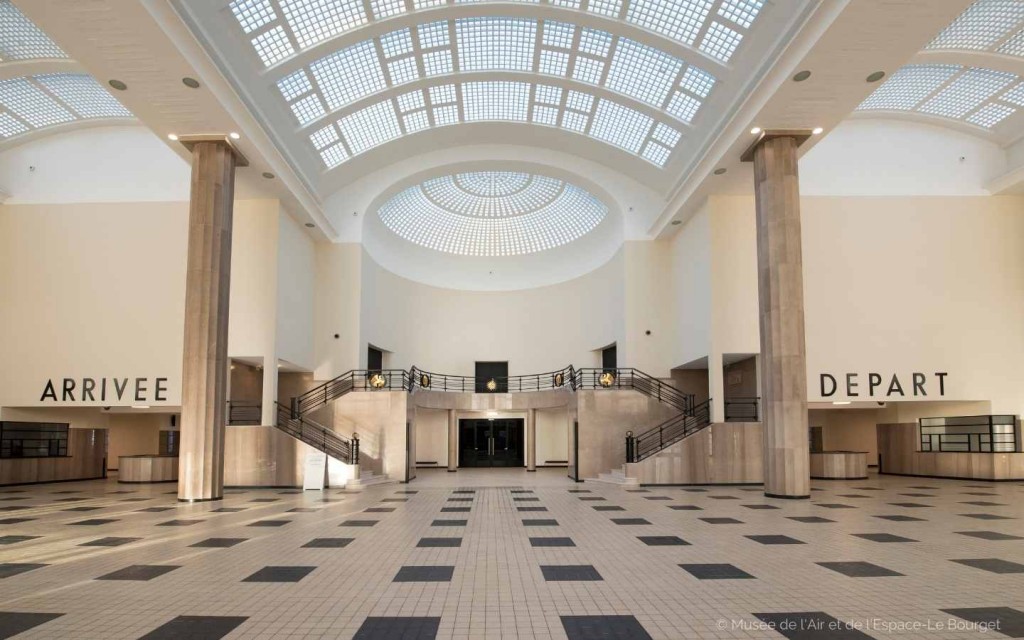 The Musée de l'Air et de l'Espace (MAE), a century-old institution established in 1975 on part of Le Bourget Airport, the historic site of French aviation, is one of the largest aviation museums in the world. The sumptuous Art Deco terminal building, recently renovated, allows dinners for 400 people and cocktail parties for up to 1500 people.

Hotel Le Marois: elegance and refinement of the Second Empire 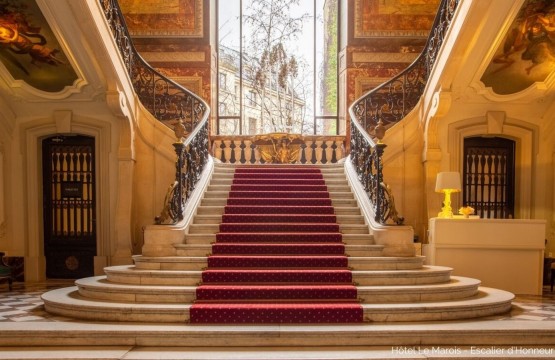 In Sèvres, the secrets of an exceptional craft 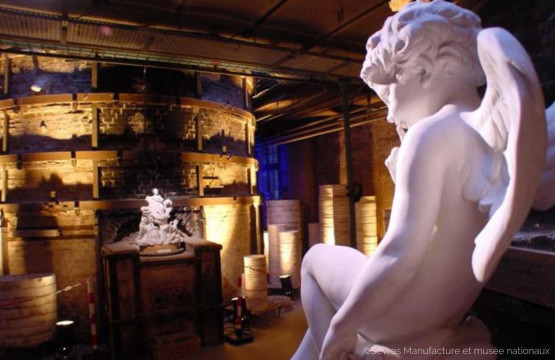 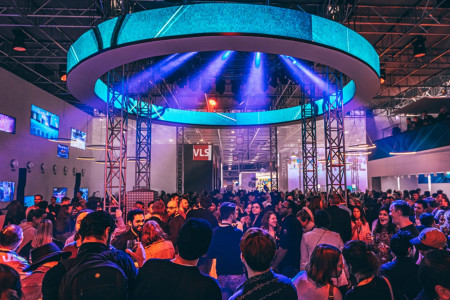 Heavent Paris, the exhibition of innovation, solutions and services for events and shows, has just closed its doors... Read more 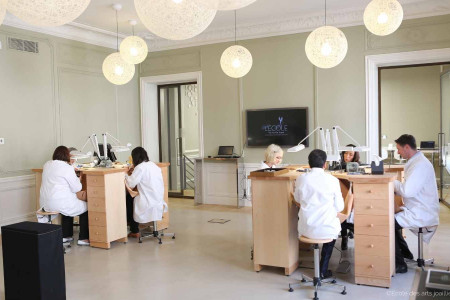 The School of Jewellery Arts is a unique place and experience in the world. As it celebrates its 10th anniversary, its... Read more 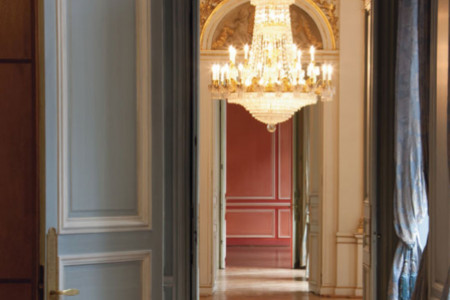 Choosing a venue for an event is an art. Certainly! It's an art that organizers are quick to forget, as they prefer to choose a venue in a hurry... Read more

Posted 6 days ago by Jade Caillot

What you should know about the exhibition... More about the show

Posted 1 week ago by Jade Caillot

Posted 4 weeks ago by Jade Caillot